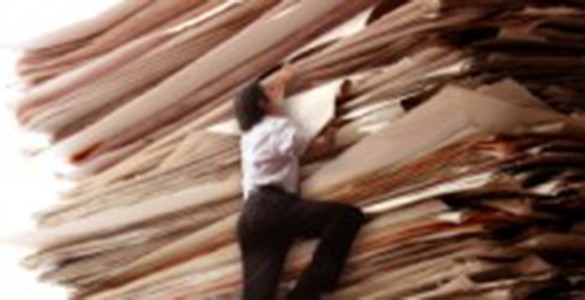 When designers told us in a recent piece of research we conducted that they need “more” information, it surprised us. This is the age of content. Never have so many people generated so much digital data so quickly, experts at the San Diego Supercomputer Center said in a WSJ article (http://goo.gl/W47xC).

“Computer users world-wide generate enough digital data every 15 minutes to fill the U.S. Library of Congress.” The fact is, Alexander Szalay, a Johns Hopkins astrophysicist, points out, more technical data have been collected in the past year alone than in all previous years since science began. According to Szalay, “The data is doubling every year.”

1) There are more people who interact with information – between 1990 and 2005, more than 1 billion people worldwide entered the middle class. As they get richer, they become more literate, which fuels information growth. (James Cortada of IBM)

2) By 2013, the amount of traffic flowing over the Internet annually will reach 667 exabytes. The quantity of data is growing faster than the ability of the network to carry it all. (Cisco) (http://goo.gl/eZKHF)

When people get “swamped” by information, there are profound negative effects. One time, I walked into a good friend, national sales manager’s office. He was frozen over his computer screen, his back to the door. I walked up behind him, asking, “Are you alright?” He mumbled something, glanced up with vacant eyes at me, and said, “I’ve got 345 emails in my inbox since two hours ago.” He looked back helpless. “Would you like a suggestion?” I asked. He nodded yes. I walked up to his computer, selected them all, and deleted them. “What are you doing?” he said nervously. “Don’t worry,” I replied. “When you don’t reply to the important ones, they will e-mail you back! Now, let’s have our meeting!”

The chart below (from another piece of research for an architectural hardware client we work for) shows where professionals go for information, and immediately shows the strength of the Internet. Now keep in mind, this chart will change – both from a targeted survey point of view, and over time. In other words, the percentages will “shift” based on when the survey is taken, how the survey was implemented and who is the target for the survey.

But what is clear is that the sources of information do not change: they simply “move” over time in terms of the amount of people using that channel. Also, this chart is for an architectural hardware client. The chart for a plumbing client would be vastly different.

What we must understand in this age of content is that people want the information served up to them the way they want it served – not the way “we” want to serve it. Moreover, the “type” of information is just as important as the information itself! In a comprehensive study with architects on where they go for inspiration, they listed over 250 magazines among other places like the Internet. Many of these magazines were not published in the United States!

This is why using the “senses” to reach customers is simply common sense. As human beings, the “feel” of a product is as important as “the look.” This is also why magazines for designers in particular prosper in this age of declining advertising revenues or newspaper readership (just check out any recent of Vogue!).

For more conversation, or to express your opinion about content, go to http://intrln.com/contact and talk to us. Thank you!