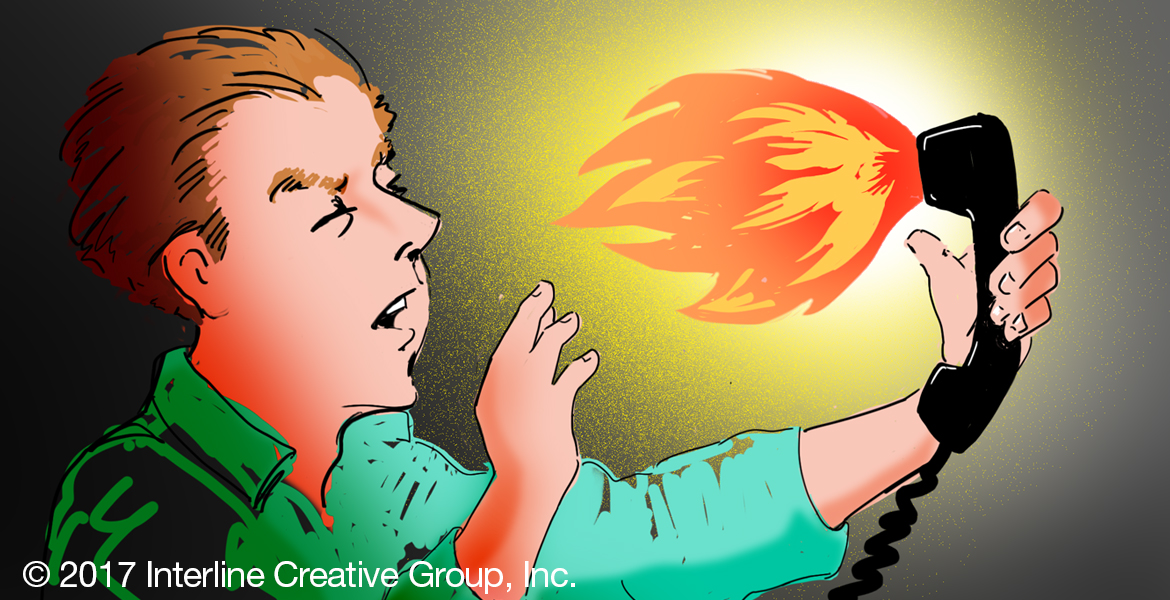 I get an e-mail from our client that asks:

“…when you get a chance can you look into this and find out if we’re generating any leads? If you prefer, I can ask the other agency to follow up with the media outlet since they set this up originally.”

The client had just consolidated their media buying to our shop. While I know and work with the other agency very well, our philosophy is to handle such requests, since we have a strong relationship with media outlets, particularly this one. I reply to the client “We’re on it” then forward the request to our media buyers with this message:

“Please investigate if any leads were generated with this (see bottom of the e-mail string). Let me know.”

You need to know the e-mail string before going on with my story to understand how the conversation went to hell.

The e-mail string begins in July. The first e-mail is from the media outlet person (let’s call her M) to the other agency:

“Just checking back to see if there is still interest in possibly sponsoring one course on our site. It would be a great fit to reach our audience of XXXXX.

Costs are $3000 for a year’s hosting and that comes with a guaranteed minimum of 350 qualified sales leads. Or if you’d like to test the waters with a shorter term commitment we have a 6 month hosting for just $1600.

Let me know if you have time for a quick (15-minute) walk through. Give me a call at the number below or send me an e-mail and we can set a time that works for you”

Obviously, a conversation has taken place before that. Good agencies filter deals from media outlets to understand and weigh pros and cons. A few minutes after M sent the agency that message, the agency forwarded M’s e-mail directly to the client with his comment:

“See below. Looks reasonable, but let me know your thoughts. If you’re interested, I’ll arrange a call.”

One month passes. Perhaps more conversations took place, but no deal yet. The agency then sends the following e-mail to the client:

“I spoke with M last week and told her that we would probably move forward with the 6 month program ($1600). Let me know if you agree. Thanks.”

Additional verbal conversations about the deal may have taken place. Forty-five minutes later, the client responds with an e-mail to the agency:

Back to the Present

Fast forward four months and the client requests the following:

“I would like to get a read on how we are tracking. I would not think we would continue this beyond the six months but would like to confirm the suspicions.”

That’s where we come in. It sounded like nothing much was happening. For example, if 350 leads were guaranteed for a year, that’s about 29 per month. Now that there are four months, there should be well over a hundred leads.

What added to the mystery is that we collect all the leads from all media outlets for our client, and had no idea this was going on because no leads had shown up.

So far it’s a typical story. Routine follow up, dropped balls, etc. But then, you never know when things are going to go to hell. Here’s what happened.

The Conversation from Hell

My media buyer informed me that the media outlet wouldn’t forward any leads to us because we did not authorize the purchase. Basically, M said this:

“Got your message regarding leads. We are providing the leads back to the contact at the company that set up the program. If he lets me know they need to be routed a different way we can get that changed. Thanks! M”

My media buyer rightly “elevated” (as they say these days) the request to me, and I picked up the phone and called M.

“Hi, M. My name is Jim Nowakowski. You’ve been talking to one of my media buyers here about COMPANY and the leads from this program, and I’d like to get those leads.”

“As I told your buyer, they are being sent to the person who purchased the program at the COMPANY.”

“I understand,” I replied. “Can you tell me the name of that person so I can get you the permission you want? I have a feeling he wouldn’t be asking me for them if he had been getting them.”

“You mean my client, don’t you? But he just told me to find out about these leads from this program. Are you going to help me help him?”

“M, do you know who I am?” I always hate playing that card, the ‘do-you-know-who-I-am’ card. Most people don’t know who I am, or care for that matter. But in this case, I suspected she might know because I deal with the President of her company. And I was right!

“Yes,” she said. “I know you. I know you know the President of our company. And he has been made aware of this situation.”

“What situation? All I’m trying to do is get leads from my client’s program.”

“So you know I’m not Tom, Dick or Harry. And did the President tell you to send me the leads?”

“He hasn’t responded to my e-mail. He’s at a trade show.”

“Why won’t you just send me the leads since you know who I am and I’m not lying to you?”

“Because you’re not him.”

“I really think you should give up your use of the pronoun, because I know who you are referring to. Is him so-and-so?” I asked, knowing full well who “him” is.

“I can’t tell you that,” M says. I feel my blood pressure rising a notch.

“You’re kidding, right? I can send him a text and within a few minutes you’d have the authorization to give me his leads. Just confirm to me who ‘him’ is since I told you.”

“Well who are you sending the leads to – so-and-so, or the other agency guy.”

“Do you think if you were sending it to him, he would be asking me to find out where the leads are going?”

“So let me get this straight. You’re telling me that even though we’re their agency, and we know who bought this program, and we know the President of your company, you’re not going to send me the leads my client wants that he paid for in the program. Is that right?”

“You don’t have to wait two minutes,” I said. “Why don’t you leave now.” And I hung up the phone.

I think I have hung up on people only a hand full of times my entire life. I called the President an hour later and he said, “Why didn’t you just call me? After talking to her, I got mad and hung up too.”

“But she works for you,” I said. “Listen, this is pretty revealing, isn’t it? You have patience, I have patience, and we hang up on the same person. I guess it might not be us, huh?”

The Moral of the Story

The file we eventually received had 18 leads. The client has decided to drop the program. But perhaps more important, the incident revealed a flaw in the media outlet’s operation, a flaw that could be costing them business. It’s a flaw many companies have, but don’t know it. What flaw?

If I didn’t have a relationship with the President of that outlet, I would never purchase another product or service from them again because of this crappy experience. I talk with many people in my business life, and I have gotten hung up on by some of them, but never for being rude – or stupid.

2 thoughts on “ANOTHER CONVERSATION FROM HELL”