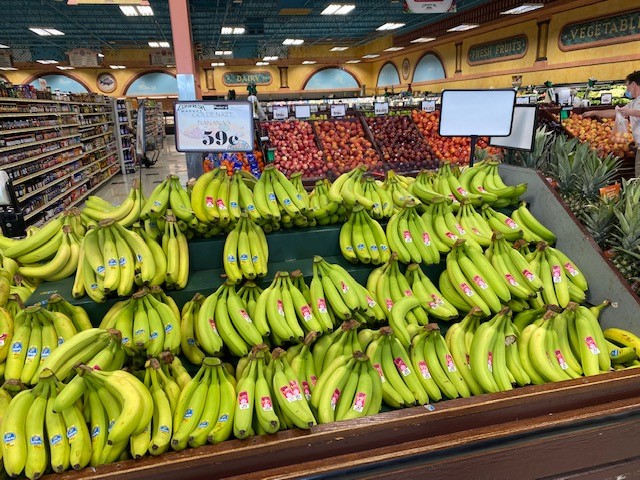 My wife often asks me, “Why do you engage people so much?”

I usually answer, “because I learn things that way.”

Of course, sometimes the engagement goes South. But every now and then, the encounter produces a variation on a thread that runs through my life.

I don’t know anyone who doesn’t like a good banana.

When I read Rich Cohen’s The Fish That Ate the Whale: The Life and Times of America’s Banana King, I learned more than I ever wanted to know about them. Cohen, who was also the author of Tough Jews, weaves an incredibly rich, entertaining and inspiring story about Sam Zemurray who created an empire around the banana. It’s a must read for a business person.

Since opening my business over 30 years ago, I’ve kept fresh fruit on the table in the kitchen of our offices. I told my employees, “The day you don’t see fruit is the day to start worrying about the business.”

Through good and bad times, I kept that tradition, and the banana was a consistent winner: there were none left by the end of the week, while other fruit like the apple or pear remained.

We Have No Bananas

On the way to the office a couple of week ago, I stopped at the local fresh fruit market (not a chain) where there is an abundance of choices, including bananas.

As I faced the banana stand, there was a man to my right (I was on the left by the 59-cents  a pound sign). I had grabbed my three bags for the bunches I would pick and I noticed this man kept picking up a bunch, looking at it, putting it back, picking up another bunch and repeating the examination. He didn’t stay to the right, but strayed toward me reaching for a bunch in front of me. He was examining each with an intensity that was curious.

I spotted the last of three bunches I wanted at the upper level on the far right in front of the man, and decided to go for it.

I said, “Pardon me,” reached and grabbed it. He looked at the bunch he had in his hand and quickly glanced at mine as if comparing them.

I put mine in my plastic bag and was about to leave, when the man said, “Excuse me, but are all these bananas the same price?”

I replied pointing to the sign, “Yes…59 cents a pound.”

“But there is no price on the sign on the right,” he pointed out.

I nodded. “You are correct,” I said, “but that doesn’t matter. They are all 59-cents. They probably ran out of the signs.”

“Are these organic,” he asked. “Is that why there is no price there?” 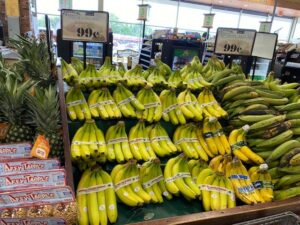 “No,” I said. “Organic ones are on the other side, and are 99 cents a pound. They are also wrapped with a plastic band. The store doesn’t want you mixing up organic with these regular bananas, although if they are coming from the ground, I think that may qualify them for organic.”

He smiled. “Then why do these 59-cent bananas on this side have different labels?” He showed me and it was clearly two different brands of bananas.

“That’s a good point, ” I said looking closer and see there were indeed two different brands. “But that doesn’t really matter. They are all 59-cents because they are on this side.”

He smiled, nodding in understanding. “It sounds like you know your bananas.”

I smiled back. “Nature’s perfect fruit,” I mentioned as I turned toward the register.

“Lots of Potassium,” he said, putting the bunch he was holding in his own plastic bag.

“What about the egg,” said another man on the other organic side who had over heard the conversation.

“Every vitamin known to man is in the yoke of an egg,” I said.

“And the cholesterol too don’t forget,” he said, smiling.

As I walked to the register, I thought to myself this was one of those moments so spontaneous and unexpected, was fate trying to tell me something? How do you have a conversation like this wearing a mask?

As I paid my 59 cents a pound, I also wondered about the nature of information, how it moves, is circulated and consumed. Do people really understand bananas when they buy them? Or eat them? Or do they just buy them on the price, regardless of brand like we did that day?

Then I secretly wished that some of my clients would realize that I really know my bananas.