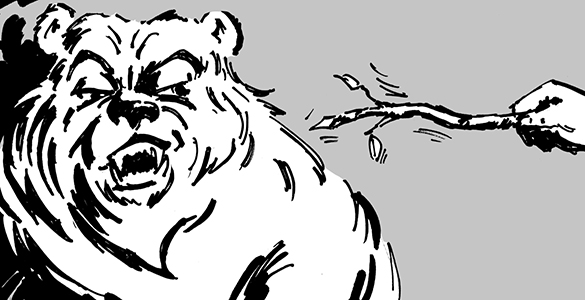 The phone rang. It was a client who said, “Did you see the e-mail from the boss?” I always think it odd when people call and ask if I saw an e-mail.

“The boss is moving a project from you to So-and-So.”

Quickly, I searched for the e-mail, read it and said, “I’ll have to call you back.”

I hung up and dialed “So-and-So,” whom I had always positioned as a partner in my mind, working in tandem to the benefit of my clients. When So-and-So answered, we made the usual small talk, but then I said, “When were you going to call me and tell me you had stolen our business?”

So-and-So acted stunned. “What are you talking about?”

I explained the situation.

“I didn’t know you provided that service,” So-and-So said.

That was hard to believe after three years of working together. Or was it? So-and-So was just being So-and-So: a good salesman. He pitched our client and appealed to his better-pricing mentality. I had a further conversation, with So-and-So becoming defensive. It was obvious he did know he was an interloper.

I hung up. I wrote an e-mail to my client because there were certain questions that he needed to answer if that project was going to move to So-and-So. After a few e-mails back and forth, I called my client to straighten out the final details. It was a very cordial conversation.

“I was also very surprised by your other comprehensive research,” he said in closing. You see, we do a lot of business with this client, which gives us a great advantage in understanding their business – something So-and-So doesn’t have a clue about. “What surprised me is how many of our prospects and customers say that the manufacturer’s website was frequently visited, and how really important those websites are to them.”

Surprised myself by the comment (we know that this is true across the board…that the company website is the single most important marketing tactic a company has), I said, “Why would that surprise you? That other project we suspended a couple of months ago because of the lack of follow up capacity on the information demonstrated the website’s importance each month by showing us the companies who visited you, where they went, and so on.” He thought for a minute about that project, which uses a proprietary code placed on the client’s website that does a reverse IP address lookup to show us who is gulping their content.

The client said, “Poking the bear?”

I didn’t respond right away. I had heard the expression poking the bear, but that was certainly not what I was doing, as I have never viewed my clients as bears. But then, aren’t we always poking or getting poked? Isn’t the whole idea of innovation and creativity about poking? Maybe I was doing it subconsciously.

I replied, “I’m just sayin’ that we understand the real value of the website. The research we did simply confirmed what we both already knew. I also understand why you cut the project: you don’t have the horses to follow up on that valuable information.”

We ended the conversation on an up note, saying that we may revisit the project later this year.

What Does Poking the Bear Mean?

When I looked up “poking the bear,” the urban dictionary said, “To act in such a way that has a good, but not definite chance, of causing trouble. (You can poke a bear once and maybe get away with it, but if you keep poking him, he’s going to get really angry.) To stir things up.”

I’ve always been someone who stirs things up, but it’s always to move things along. I remember poking one client so much, questioning the validity of the project he wanted us to do that he said, “Look. Are you going to do it or not? I’ll find someone else if you don’t want it.” Of course, we took the project.

I poke to challenge our clients, myself. It’s called asking clarification, and as a former teacher, I learned clarification is good.

I think it is important to poke, don’t you? A little poke now and then is good for everyone.

One of my efficient staff sometimes talks to me about what seems to them an uncomfortable situation. Over the last dozen years, this has happened only three times. Each time we have our conversation about the situation to clarify it, I get an e-mail the next day with the subject line: KITA. The message is short: “I just need a Kick in the Ass sometimes.”

Tell me what you think! Would love to hear from you.

2 thoughts on “ARE YOU POKING THE BEAR WHEN YOU SHOULD BE?”