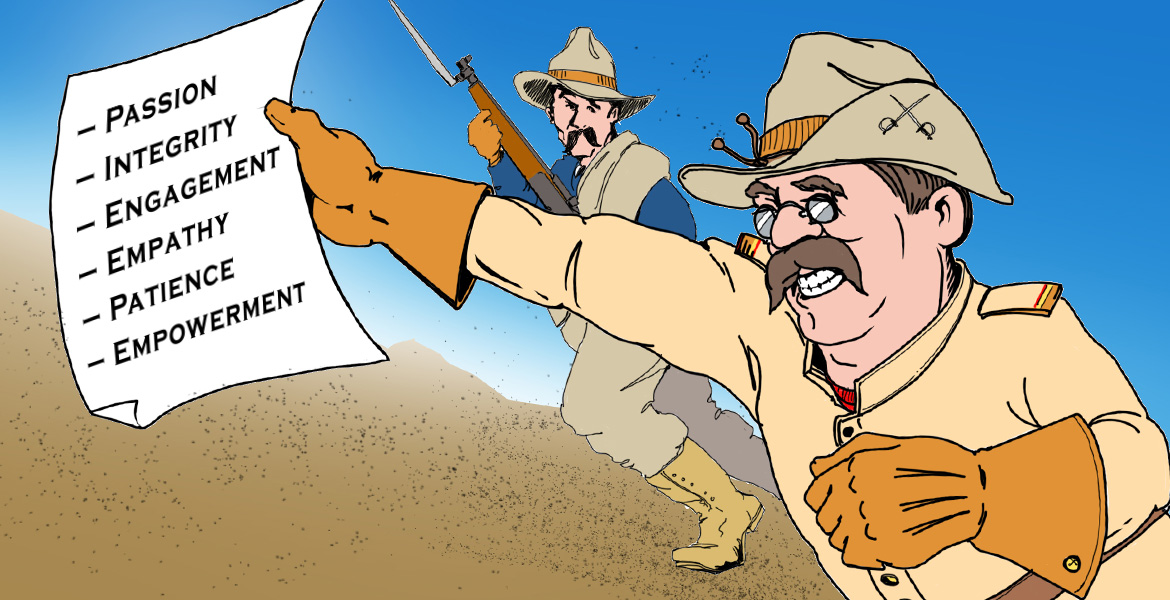 One of the networking groups I’m involved with asks a question each month at the beginning of the meeting and has the group answer it to kick start the discussion.

The questions vary, but last month’s was about leadership.

“What is the most important example a leader should project in today’s world?”

I usually take careful notes when people answer a proposed question, and this month was no different.

There were many excellent responses, including: lead by example, listening, passion, integrity, engagement, the structure of subordinates, nurturing, culture.

All of these words qualify as an answer to what example a leader should project.

In fact, 741,000,000 results are produced in 0.96 seconds if you ask Google that same question. Leading by Example from www.mindtools.com is the first result on page one of that search. But Google mistakenly took the word “example” to be part of the answers it delivers, an error which Google  and others often make.

I changed the search to “What is the quality a leader should project” and Google did the same thing: it mixed up the answers by giving me the top 10 qualities of a project manager. That’s the nature of Google sometimes: to confuse things.

But if I Googled “Qualities of a Leader,” up came many of the words used by the people in that room: passion, empathy, empowerment, open-minded, patience, and so on.

I guess a lot depends how a question is asked (lawyers know this).

I always take a different point of view with questions like this. Having minored in philosophy and theology, majoring in English, I tend to see things in business very differently; often, I answer a question with a question, or I take a negative approach to the discussion at hand (not because I’m the Devil’s Advocate, though…).

I learned this technique from reading Henri Bergson, the French philosopher. In his book Creative Evolution, he said:

“Whenever I deny, I perform two very definite acts: (1) Interest myself in what one of my fellows affirms, or in what he was going to say, or in what might have been said by another; (2) I announce that some other affirmation, whose content I do not specify, will have to be substituted for the one I find before me.”

My earlier blog on the panel discussion at the University of Phoenix spells out this approach.

I answered the group that morning this way when my turn came up in that meeting.

“Can you have a leader without followers? I like to examine leadership from the perspective of the followers of a leader. Your responses all are qualities, of course, necessary in a leader, but the question of what is the most important example a leader should project begs the question: Why do people follow a person?”

The group nodded and a short discussion on my response ensued. They found it “interesting,” but the group kept on offering additional answers that were qualities. It’s hard to discuss abstract things like leadership.

Eventually, the discussion itself moved on to the next topic and leadership, as abstract ideas these days often do, fell by the wayside.

I remember seeing a poster with that headline on it once. I think there were cowboys in it riding hard toward the camera. Dust was all around them, as you saw the group (perhaps a posse) riding, arms waving, horses panting, and lots of dust. But the headline really sums leadership up nicely: you lead, you follow, or you get out of the way.

Leadership is one of those words that by itself is actually meaningless. It’s intangible. Like “trust” or “love,” you can’t really use your senses to touch, feel or hear it much less define it.

You can be a leader. But does that mean you are no longer a follower?

Respectfully, a leader has accumulated followers who — for whatever reason — believe the same things that the leader is espousing. Leaders give orders; followers obey.

Therefore, obedience is a quality in followers that is necessary in order to have a leader. It is also the quality that the leader demands and needs to be a leader. Without obedience, there are no followers. Without followers, there is no leader. See the connection?

Lou Holtz was a famous coach. He said once (I think) that coaching is like driving a bus; you can have only one driver at a time. If you don’t like the driver, you get off the bus. If you want to be the driver, I will throw you off the bus.

Some people think that knowing yourself is a dangerous thing[1]. It’s not. It is the essence of understanding abstract terms like leadership.

Actually, each one of us is both a leader and a follower.

The example I always use to explain this concept involves a rubber band.

If you and I take each end of a rubber band and begin pulling, eventually the rubber band will break. We created enough tension to do that.

However, if you start pulling and I let myself be pulled (or vice versa), the rubber band will never break. In this case, someone is leading, and someone is following. A relationship is created.

The question is, of course, who is leading and who is following? It’s a question of who is in control?

Some argue that the person pulling is the leader, but that’s only half true. Respectfully, the follower is allowing it and, therefore, is actually “in control.” Otherwise, tension would erupt.

I would say that followers are just as, if not more, “powerful” than leaders in many cases.

Recently we had one of our top graphic designers retire suddenly. He walked into my office January 2 and announced that he is retiring to go fishing. I asked when, and he said, “Today.”

He no longer wanted to follow like the rest of us as we go to battle for our clients each and every day. So, he just got out of the way.

And that’s a good thing, for the followers and for the leader. When people who aren’t one or the other, and they stick around, well, things go South pretty fast. Getting out of the way makes following and leading much easier for the rest of us.

Let me know what you think.

[1] Bence Nanay is professor of philosophy at the University of Antwerp and senior research associate at the University of Cambridge and wrote an essay called “‘Know thyself’ is not just silly advice: it’s actively dangerous” which put forth the premise that “The problem is that none of this is based on a realistic picture of the self and of how we make decisions. This whole ‘knowing thyself’ business is not as simple as it seems. In fact, it might be a serious philosophical muddle – not to say bad advice.” He uses ordering espresso as an example, which is the tell that he obviously doesn’t know himself much less anyone else.

7 thoughts on “Leadership in Today’s World”