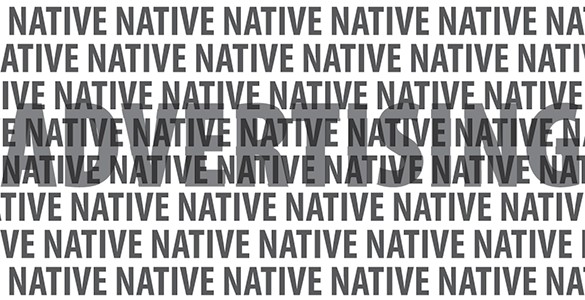 Is advertising content? The short answer is yes. It always was. But, many people feel funny about calling advertising “content.” What differentiates advertising from other content is that someone pays for it. But then, someone is paying for ALL content if you think about it.

The old saying, “follow the money” comes to mind, because money drives content. The definition of advertising (which is confusing in and of itself) is often put this way: “advertising is the activity or profession of producing advertisements for commercial products or services.” Even if you Wikipedia the word, you’re left scratching your head: advertising “is a form of marketing communication used to encourage, persuade, or manipulate an audience (viewers, readers or listeners; sometimes a specific group) to take or continue to take some action.” Isn’t that a politician’s speech?

Because ALL content seeks to encourage, persuade or manipulate; doesn’t it? Even the IAB (The Interactive Advertising Bureau) Playbook is trying to do that. Who paid for the Playbook? Is the Playbook advertising or content? See how confusing it can get?

The IAB, founded in 1996, is a wonderful organization that tries to educate all of us about “the value of interactive advertising.” It’s comprised of more than 500 media and technology companies that claim responsibility for selling 86% of online advertising in the United States. We are not one of them.

IAB also “evaluates and recommends standards and practices and fields critical research on interactive advertising.” Its Native Advertising Playbook, a 20-page paper, spells out in detail what their position is regarding a hot topic: native advertising. Since 2012 I’ve been tweeting about native advertising, which was then just started to get hot. For example, in December 2012, I tweeted:

“Native advertising” is being hailed as the ad format of the future http://goo.gl/Mmcjn.

The link takes you to a story by Jeff John Roberts posted on paidContent that discusses the Solve Media survey, which found that 49 percent of media buyers would buy native advertising and that 14 percent of publishers planned to add a native ad option next year. The actual study Roberts refers to, “Native Advertising: Advertising that Gives Back to the Consumer,” conducted by Solve Media, if you are interested.

By February, 2013, Native Advertising was in hot debate. I tweeted at the time:

@edwardwasserman says native advertising is all about deception. Excuse me? But they tell you it’s an ad! http://goo.gl/kImtt

That link went to the Advertising Goes Native and Deception Runs Free piece that Dean Wasserman of US Berkeley Graduate School of Journalism wrote in the Huffington Post. Wasserman was very annoyed because as a journalist, “native” runs contrary to what’s pure journalism. But, what Wasserman didn’t know and couldn’t know by writing his article is that he actually became the poster-boy for how the IAB now defines “native advertising.”

In the introduction to the IAB Playbook, it states: “native is in the eye of the beholder, depending on where one sits in the ecosystem and the strategic and media objectives of the marketer.”

“The eye of the beholder” is exactly Wasserman’s objection. It caused quite a commotion at the time. The dust still hasn’t settled. And it’s likely not to settle, because the fact is, what is and is not advertising is really at the heart of the “native” debate. And because it is in the “eye of the beholder,” guess who else got involved: the FTC. I tweeted last December:

The link leads to the Ad Age story, “Key Question for FTC: Are ‘Native’ Ads Deceptive to Consumers?” In fact, I tweeted just this month:

This link will take you to a story about how pinned content on Pinterest featuring a brand’s product and generated via a contest must be clearly marked as a product endorsement. The actual letter from the FTC spells it out clearly: that even though the FTC didn’t take any action, that they could – and would – if the situation warrants it. In short, advertiser beware if they see something as native and you don’t. I guess the IAB’s definition isn’t quite true. The FTC is might really be the only beholder that counts!

And there were other tweets and further debates. In January, I said:

“There is no effective way to measure native advertising. http://goo.gl/CRQanZ.”

This ADWEEK article talked about another name for native advertising – branded content. When definitions aren’t clear, people begin making up new buzzwords to try to explain what is happening, which often only compound the problem. Because regardless of what you call it, the essence of the argument is: what is or is not advertising, native or otherwise.

What the IAB is Selling

The IAB Playbook attempts to define “native” for you based on the 100+ member companies on their Task Force. They had 100 member companies thinking about this and looking for a “common language” on the subject. The IAB Playbook states: “Native Advertising is a concept encompassing both an aspiration as well as a suite of ad products.” What this means is stated in the next series of sentences, and contains the crux of their point of view:

“It is clear that most advertisers and publishers aspire to deliver paid ads that are so cohesive with the page content, assimilated into the design, and consistent with the platform behavior that the viewer simply feels that they belong. To achieve this, advertisers deploy tactical ad products, and the IAB Native Task Force has identified the six categories of ad unit types most commonly used today in pursuit of this goal.”

The heart of the statement is “most advertisers and publishers aspire to deliver paid ads.” The Internet nullifies that, in that everyone is a publisher, and anyone can be paid. The FTC doesn’t like that, of course, because then “reasonable” consumers will be confused. The lines are blurred. The danger is, we’re all being sold something. But, aren’t we already?

In essence, “native advertising” is advertising that gets confused with straight content and, in turn, may confuse the consumer of content. But, that’s been happening all the time. Hasn’t it?

But then, what’s the argument all about? If everything is advertising/content, isn’t the argument about what people are paying for? You pay people to run an ad to reach a certain audience. On the internet, the word is your audience. SEO is probably the best advertising investment you can make.

My suggestion (and again, I’m not on any committee) is to do away with the adjectives and just call advertising what it is: advertising. If advertising is in the eye of the beholder, then what it is or isn’t is just that: what you think. Unlike Wasserman, I think journalism today is under the gun for what it is or isn’t. And as lines continue to blur, so will what we behold.

The question is and always will be, what do us beholders do about what we behold? Respectfully, turn the channel if you don’t want to receive the message. Just what we’ve doing all these years. It’s not about the message, which is all advertising. It’s about the delivery mechanism. And who among us can control THAT these days?

For more conversation about advertising, contact us or drop me a note.

P.S. I was at a Google-sponsored a couple of years ago. There was a panel discussion, comprised of a Northwestern Professor, three Google people and Guy Kawasaki (Yes, Guy Kawasaki himself). After dinner they opened the floor to questions, and I was first up. “My clients really want to know what is advertising in this digital world?” They discussed it for five minutes, but were unable to come to a conclusion. They were going to move on to the next question, but I wouldn’t let them.

“You don’t understand,” I interrupted. “My clients need to know this. We all need to know it. What IS advertising?”They discussed it for five more minutes or so and the Northwestern professor finally said, “Everything is advertising.” I smiled, sat down. It was the answer I already knew.