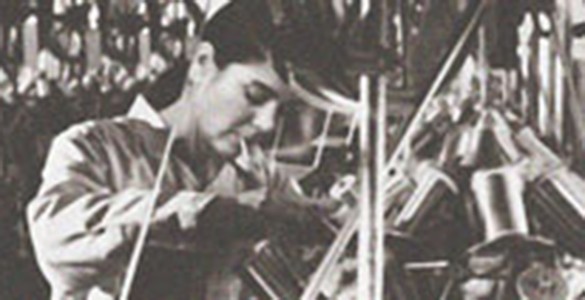 When I was in college, I worked every summer to put myself through school. Even before college, I would be working when I wasn’t in school because I needed money. One of these summer jobs was for a major company’s factory on North Avenue in Chicago. After I filled in the application to apply for work – any work –the personnel person (they still had them in those days) said that I would hired for the job of “hustler.” “What’s that,” that I asked. “It’s the entry level position on the floor. It’s perfect for you for the summer. It pays minimum wage,” she said. I was happy to have the work.

My job was to move 5-ft. x 3-ft. x 3-ft. crates into the aisle away from a punch press and stack them three high so a fork lift operator would take them to another part of the factory floor. It sounded simple enough. I asked the supervisor that morning I started why it was called the position “hustler”– after all, I was majoring in English and words have always meant a lot to me. He smiled and replied, “You’ll see.”

The factory floor itself was huge – taking up three square blocks on North Avenue and Pulaski. It was loaded with machinery, mainly punch presses. The operators of the presses – mostly women – would be punching out metal into various shapes. As they punched, the pieces would fall into the waiting crate below the press, which I had to move into the aisle for the fork lift before it overflowed, and place an empty one underneath the press to catch the parts being punched.

“Do you understand,” the supervisor asked walking me around the floor which would be my area? “Sure,” I said. “That’s it?” He didn’t answer, but kept walking. I saw the women sitting by their machines; they were all knitting. Some talked to each other as they knitted. They all looked at me briefly, giving me the once over. I didn’t know it at the time, but they were assessing if I’d make it as a hustler.

“Any questions,” he asked? “But remember, you have to keep up with the operators. They are not going to stop. If you don’t replace the crate you moved with an empty one, you’ll have parts all over the floor. You’ll have to pick them up. And that will throw your schedule off. And remember: stack them up three high at least for the fork lift.”

“What schedule,” I asked? “You’ll see,” he said, still smiling. He introduced me to two other guys around my age, who were also hustlers. “You start when the whistle goes off. You’ll get a break, lunch, and another break. Any questions?” Without waiting for an answer, he handed me some ear plugs. “You’ll need these, and these,” he said, handing me work gloves. “Good luck.”

The whistle blew, and the sound became deafening. I quickly put on my ear plugs and stood by the first machine, waiting for it to fill up. I looked down the aisle and spotting parts flying into the aisle; they were bigger parts, and the crate filled up faster. I ran over, pulled out the crate, replaced it with an empty one, picked up the ones that had overflowed, and ran back to the first machine. It was full. I pulled it into the aisle, replaced it, and went to the next machine, which was also full. I repeated the process. I worked the area, learning by trial and error which crate would fill up faster. I moved, replaced, lifted, and stacked. The forklift driver, a big man always with a cigar in his mouth, would drive by often yelling, “Move it! Move it!” and smile. Even some of the women smiled at me, especially when the parts went overflowing into the aisle. Others showed kindness, by momentarily pausing their motion. But only for a stroke or two. They simply didn’t care; their job was to produce parts. My job was to keep the crates empty. It became a contest.

By the time the first break came, I was drenched in sweat. I sat down on an empty crate, wiping my face in my sleeve, breathing heavily. The women on the punch press all stopped when the whistle blew, remained in their chairs and took out their knitting. They seemed to have this need to always be in motion, even during break. Some lit cigarettes and smoked with the cigarette dangling from their mouth like I saw my father do when he talked, and knitted feverishly. The whistle blew, they put away their knitting and started pounding away. I went back to hustling.

One of the hustlers I met earlier walked by and sat next to me at the end of the day, saying, “You coming back? Most college guys lose it and leave,” he said, puffing on his cigarette. “How did you know I’m in college,” I asked? He smiled, not answering.

“They think the war is still going on,” he replied, puffing on his cigarette. “They were doing piece work during the war, you know, they got paid by the number of pieces they produced. They still think the war is going on. They don’t stop for nothin’.”

I came back. I learned a lot that summer. About people. About logistics. About planning my moves. Because the women didn’t stop. I would talk to some of them at lunch. They were all nice, friendly people. But behind their machines, they became productive monsters. Whether I was there or not, they kept on producing. They simply didn’t care; they were paid to produce, and you had better do your job and keep up, or not. It didn’t matter to them. So you hustled.

That seems to be what the virus did to us: it killed our hustle.

With due respect, I think everyone should start their careers hustling again. I think every college student — every person who finds himself or herself furloughed these days — should start hustling. Write letters. Get on the phone. Drive around and look for Help Wanted signs. They are out there. I know, because I see them on my way to my office each and every day.

I did a case history for a client at a steel fabricating plant in Wisconsin before the Virus hit. The same people I met in that factory in Chicago were working there. Tough, resilient, self-reliant, American. While I wonder what they are doing now, during this virus thing, I’m willing to bet they are not sitting on their ass.

Perhaps the best way to get a job these days is to apply for it. Any job. You’re bound to learn something about life, you know, the stuff they never ever teach you in school.

What do you think?