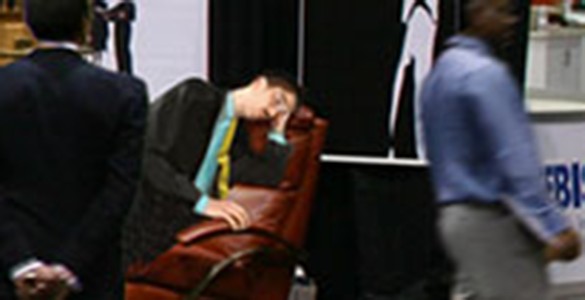 I’m always amazed how many people don’t know how to work a booth at a trade show. In many cases, the philosophy is: “If you build it, they will come.” Nothing could be further from the truth.

Like all industries, the recession of 2008 hit trade shows especially hard, but it’s coming back. According to Exhibit Surveys who studies such things with metrics that have become industry standards, the Net Buying Influences (NBI) measure is about the same today as it was when the depression hit us. NBI is the net percentage of attendees who have one or more roles (final say, specify supplier, and/or recommend) in purchasing the types of products exhibited. Their Traffic Density is up, Hours Spent Viewing Exhibits, and almost all the other metrics they measure.

But that still doesn’t change what I saw when I attended the NFPA conference recently in Chicago. People just don’t know how to work a booth anymore.

I spent several hours walking up and down the aisles. We had several clients exhibiting and I was reconnoitering competitors as well as pursuing new opportunities. But, I was also really interested, as I always am, in how people work a show. It was a major trade event, and there were a lot of people. Here’s some of what I saw:

Now obviously there was some interaction going on. A few exhibitors were pitching, but for the most part, I was very surprised about the lack of pitching going on. If you did a poll among them, I will venture a guess that the majority will tell you the show sucked. The question is, “Whose fault is that?”

I remember one time our client, the AISC (American Institute of Steel Construction), asked if we could find “steel stories.” We were running a campaign featuring projects that used steel and we needed more leads. It was a last minute decision. “I was thinking of getting you a ten-foot booth at our show, blow up some of the ads we did, and see if you can talk to people into some stories,” our client said.

I jumped at the chance. The ads featured an architect, engineer, or other construction professional talking about his career, his work, his knowledge of construction and steel specifically. These ads were a great success for the association obviously because they featured people who loved steel. More important, however, they shared their emotions with other people in the business, who also loved steel (see the case history of the project called Customer Profile Ads Validate Association’s Mission). And even those who didn’t felt a certain attraction to their personal stories of success. They wanted more of them, and their show seemed a likely hunting ground.

The day of the show arrived. My booth was about in a bad a location as you can get – way off the beaten track next to other ten foot booths. Across the aisle was a 20-footer, and next to that another couple of tens. All had equipment and products or software services. My little space had two signs, about 3-ft x 3-ft, black and white. I used some wire I found to wrap them around the poles, and the standard exhibitor sign (black and white rectangle) said in large letters: American Institute of Steel Construction. No table. No chairs. Just a couple of signs hanging on hooks.

Then the fun began. You see, the way you work a trade show is to confront people. People naturally don’t want to stop unless they have an inherent interest in what they see. And in my both, there was NOTHING to see. I was selling stories – intangible opportunities to talk about steel. Why WOULD they stop. So the strategy was : stop them.

The strategy I hatched was this: I would step out into the aisle, get the attention of the attendee or attendees passing by, point to my sign and say, “You got a steel story for me?” Or, I wouldn’t say anything: I would just point and smile. They would smile back and I would ask my question.

Now some people would keep walking. But, many would stop and the conversation began – in the aisle. Not the booth. I would lead them into my small space to show them the stories and the concept, but I didn’t really have to. The conversation took place naturally, wherever they stopped. Some actually said they couldn’t talk now; they were going to a session, but would come back. Some did.

Almost everyone smiled back when I smiled. The smile, you see, is contagious – more than the common cold. Sometimes I would change up the pitch. I would ask, “Are you guys into steel?” They would look puzzled. “Steel,” I repeated. “This is the steel show isn’t it? I’m looking for some steel stories.”

Once they stopped, I started my pitch – I’m looking for stories about steel…fabricators who use it, architects who specify it. “What do you do with steel?” I’d ask, and we had a conversation. It was great fun.

Now, you could say that I wasn’t selling anything – but you’d be wrong. I was selling them an intangible idea. Do you how how hard that is? Compared to a selling a regular product, selling an idea is the hardest thing in the world!

I worked the show for only one day. I never broke for lunch. I never sat down. I had brought a bottle of water and coffee with me, and that is what I drank. I had 104 business cards when I finished the day – every one of them a potential story to be followed up on and featured in the next advertisement.

But then, I don’t think I ever had a bad show.

One time, in Chicago at the KBIS show, the announcement came on, “The KBIS showed is officially closed for today. We’ll see you tomorrow.” I was working a booth for a client all day, doing what I do: talking to people. Everyone in the booth from the client scattered when the announcement was made, except for my boss, the VP of Marketing. I saw a couple looking over the client’s product from the corner of my eye. I watched for awhile, and it became clear they were REALLY interested in the client’s product. They were NOT going home because someone announced the show was closed for the day!

I walked over to the display and said to the man, “This is really something, isn’t it?”

“We’ve seen them in Europe, but didn’t know they were in this country,” the man replied, as the woman walked around the display inspecting. “What do you do?” I asked. “I’m an architect,” he said. “Then you’ll love this product,” I said. We continued talking, as I explained what I knew. Then I said, “But, let me find the Engineering Manager who can explain much better than me. I’m just the ad man.” The architect smiled. “That would be great,” he said, handing me his business card. I started to shake inside. He was the head of the commercial group for a major architectural firm in the city – a national firm – and probably controlled all the specifications for my client’s products. He was the perfect target.

I ran to the VP of Marketing, who called the Engineering Manager on his cell phone back to the booth while he went with me and I introduced him to the couple. That couple became the subject of a case history for our client’s products, which he used in his own home!

You never know who will walk into the booth or by the booth. It is up to you to find out. And, you won’t do that sitting, texting or talking to your associates.

If you’d like us to help you on your next trade show with a selling strategy, give us a call at 847-358-4848. We love talking to people about strategy. You can also contact us here. See you on the show floor.