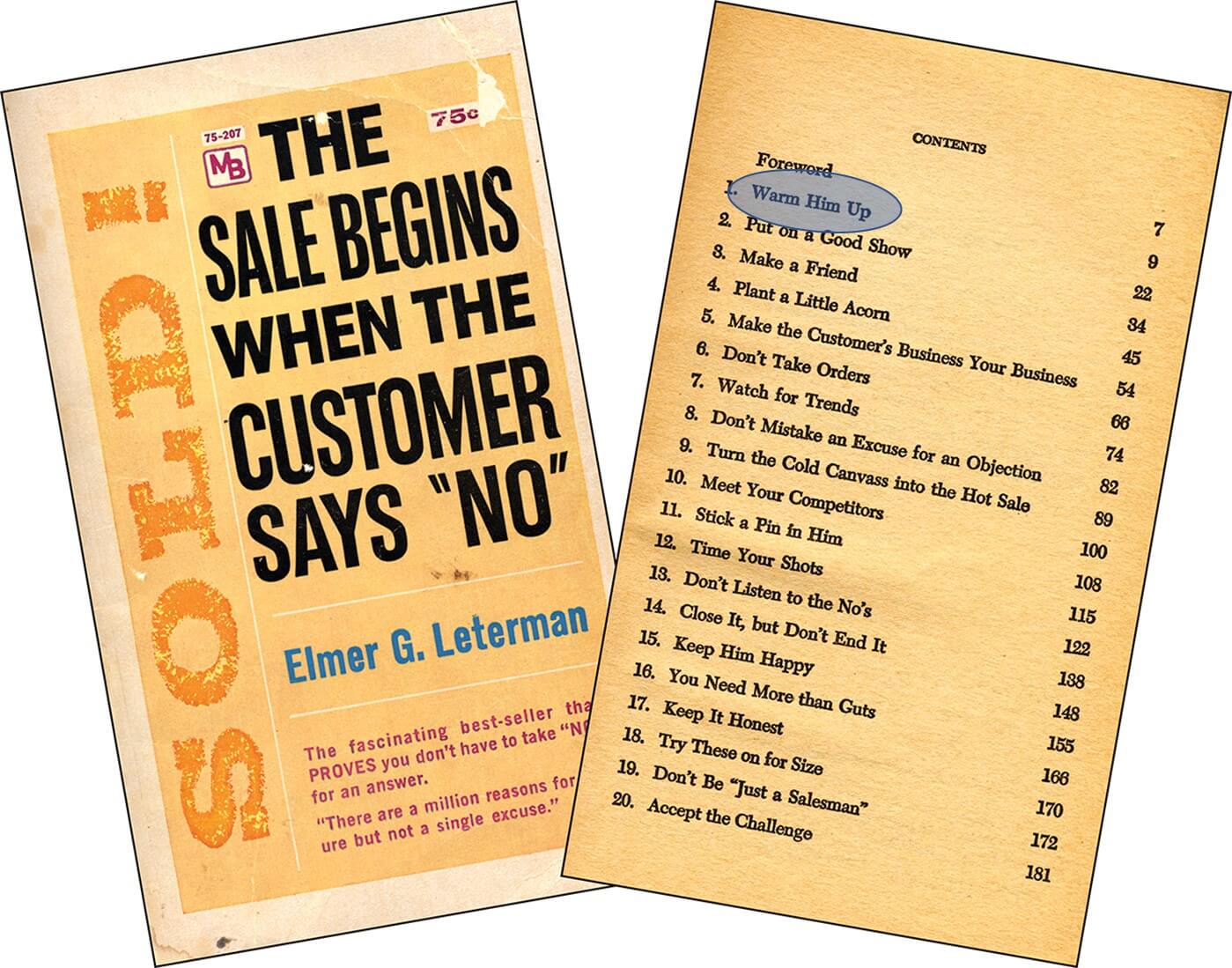 “Millions of people have a product to sell, something they know is needed and wanted, but they’ll never get to first base unless they’re ordered down there by the umpire after the pitcher throws four straight balls. These salesmen know their product, and they know that what they are selling is important…What’s wrong? Lots of things may be wrong, but I would venture to guess that above everything else, they have never learned how to create a favorable atmosphere for a sale before the act of selling has begun.”

Elmer’s sound advice in this first chapter of his book “The Sale Begins When the Customer Says No”  is critical in the age of disruption. Why? Because of time. In his day, it was almost always face-to-face selling, face-to-face preparation. But Elmer was probably the first social media guy before social media was even invented; he would continually send notes to people…talk on the phone…communicate.

So Elmer rightly asks, “When will people realize that selling is a relationship between two human begins who are in a position to help each other?” It’s the sales person’s responsibility to guide the client to discover that their needs are mutual and complementary. Hence the title of this chapter, “Warm Him Up.” Elmer called it the art of indirect selling.

One of the stories he relates is of a man invited to give a speech, who was last up in the givers of speeches. The Chairman of the company spoke right before him, and started telling everyone that the meeting was over when someone informed him there was one more guy. That guy came up and said, “Your Chairman is right. It’s a beautiful day, and I would like to move that this session be adjourned.” As Elmer tells it, that guy became the guy “who wasn’t allowed to make his speech,” and consequently met everyone individually for years afterward because they recalled that incident.

In a meeting in Ohio, none of the equipment that was supposed to be there for me wasn’t there. One person in the audience when to her car and brought in her computer, but none of the cables fit. I said, “Well, if you still want to, I have handouts.” I quickly made copies in one of the offices of the host, and I gave the presentation offering those handouts before my presentation. Afterwards, two of the audience members came up to me and said, “You don’t need any slides.” While I know I’m a good presenter, I also know that part of your ability to “anticipate, react and adapt” is a key to indirect selling. Everything you do has to be related to the client, the prospect, the customer.

That’s difficult to do. But it is essential if you are going to be successful. What helps is, of course, paving the way for the sale. One of the ways that happens is with the brand. The brand is a form of pre-selling that makes the selling itself a simpler job. Elmer talked about insurance in his book, but whether it is insurance or anything else, the rules are the same: engagement.

Other important points in this chapter included:

When I started my business in 1990, I selected ten companies I wanted to have as clients. I wrote one, five-page letter to each company. Three of those companies became my clients for several years. On the agency side, I targeted one major privately-owned company. I wrote ten letters to the advertising manager, and mailed the letters three days apart. I called him after the seventh letter and asked for the meeting. He said, “I’ll tell you what. If you promise to stop writing me letters, I’ll even hire you.” He did. We worked for that company for over 20 years – completely unheard of in the agency business at that time, and this.

There is No Substitute for Preparation

Perhaps Vince Lombardi put it best when he said, “You’ve got to be smart to be number one in any business. But more importantly, you’re got to play with your heart, with every fiber of your body. If you’re lucky enough to find someone with a lot of head and a lot of heart, that person will never come in second off the field.”

He was talking, of course, about football. But he was really talking about life – and about sales.

What do you think? Let’s hear how you use the warm up.

Elmer G. Leterman wrote this book (now virtually out of print) called, “The Sale Begins When the Customer Says No.” Translated into 70 languages and sold internationally, Leterman produced more than $58,000,000 in insurance coverage for his clients – in 1930 in the very depths of the depression. He is truly an American inspiration. This series covers his insights. After Covid, things changed, probably forever. Keep in mind, too, that when this was written, the world was very different. Please don’t let that distract you from his use of the pronoun “him.” I could have edited it out, but then, we lose the flavor of the times.  He is using “him” in the universal, the way people wrote and thought in those days. The good news is that what Elmer says is timeless – and genderless. I hope you enjoy the series, and thank you for reading.