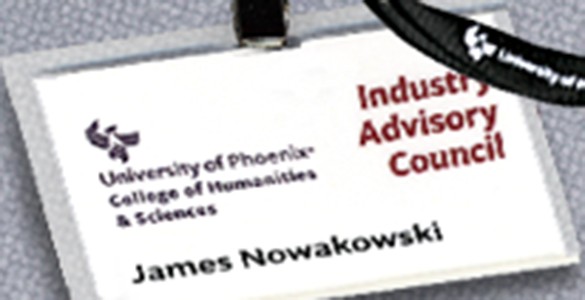 They ignored my comment. I was sitting at a panel discussion regarding the curriculum at University of Phoenix, and we were talking about how their current environment was not friendly for students who want to enroll in the B.A. English program.

Dr. Jessica Philipp, the Program Dean for Humanities, led our group, comprised of myself and 6 other people (mainly academics).

“What do you mean by unfriendly,” someone asked her over my comment?

She said that they have robust enrollments for a university that is not known for liberal arts, but bemoaned management’s reluctance to promote a major in English. They (University management) couldn’t see the payoff in the real world for the English major, she said (i.e., compared to their B.S. in Communication or Certificate in Communication and Technology or Journalism). She added that whenever they had discussions, they had to keep in mind the vision of the University: to be recognized as the most trusted provider of career-relevant higher education for working adults.

“That’s our focus,” she explained, “our guiding principle. Humanities is, therefore, more challenging. The University is more skeptical of the humanities programs we are launching, because the programs are not geared toward a business degree with a clear job path to become an accountant or marketing associate. We have to do a lot more homework to create a convincing offer for these new programs Use that as a frame of reference in our discussions.”

How I Got Invited

I was there to help. I was honored to be invited a couple of months prior to participate on this Industry Advisory Council (IAC) panel held by the University of Phoenix College of Humanities and Sciences on November 13, 2015 in Phoenix, Arizona. Dr. Constance St. Germain, the Executive Dean at the College, said in the welcome, “The IACs serve an important role by providing our colleges’ leadership with valuable perspectives on curriculum, programs, and new developments in the field from a variety of disciplines and professions.” 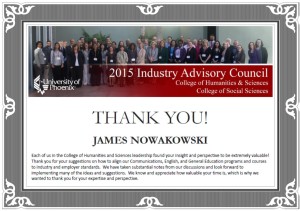 invited by Dr. Amy Smith, the Academic Dean, to provide industry insights to the Advisory Council on Humanities. She wrote to me, “Every year, we bring together leaders from certain industries that align to our existing and future academic programs to discuss industry trends and future needs and insights. For me, I think of it like a day of Industry leaders and futurists discussing and providing insights into their fields.”

But somehow, now that I was sitting there, there was a clear disconnect. The instructors who were part of my panel complained about the lack of writing skills of incoming students. And yet, management was saying that the degree in English didn’t lead to a clear path in business. That’s when I said how wrong it was to dismiss the English major. When the opportunity presented itself, I added, “Part of the liberal arts challenge is you can’t structure it like a PR course. As a liberal arts major with two degrees in English, I can tell you it’s irrefutable that you use this knowledge every day. I meet Hamlet many times — the guy who can’t make a decision. And the result is always like the play: tragedy.”

That comment was also ignored when one of the PhD’s there said, “It’s about finding ways to build clear resources to lace in these things, as when we launched career tools, etc.. Pathways, all of those helpful tools, we talked about lacing those somehow into the courses. Is that still on the table as a direction?”

I had no idea what that meant. I listened as people seemed to spew out comments unrelated to what the other person said. It was like you were on a rifle range, and everyone was shooting at their own respective targets with little regard to the shooter next to them.

“If writing is really the gap,” I said after listening to more conversation about lacing, “if people can’t write when they get to the University, what happens before they get here? Have they been taught to write?”

Dr. Philipp looked down, embarrassed, and said, “No.” She proceeded to outline how the school gets new students to take three “prep” courses that help them learn the basics of writing. “We’ve had open enrollment. We’re going to have entrance exams soon. This will help us determine what courses they will need. That’s a direction we want to take,” Dr. Philipp concluded.

One person asked, “How do we really get to the heart of where they are to motivate them?” Then he proceeded to answer his own question by talking about how his English teacher got dramatic when reading to him and how that motivated him.

What I Learned from being on the Panel

I learned that majoring in English as I did was probably the single best preparation for the reality of business I could have done – and I didn’t know I was doing it at the time. Here are just three things the study of English allowed me to do.

One of the discussions at the panel was around ethics and if it should be a separate course. One of the people said that they “laced” ethics into all the courses somewhere, while another mentioned when they discussed ethics with the students they say, “We get it! We don’t need a separate course.” The problem with lace is that while beautiful, it’s weak. And if you just look around the world today, you can quickly see that unfortunately, people – young and old – don’t seem to “get it.”

But, that’s what Liberal Arts really is: ethics. Liberal Arts allow you to investigate human conduct, crossing directly into moral philosophy and producing a science of conduct. As one of my English professors said, “You study to see how other people led their lives, and how to lead yours.” That’s why you surround yourself with the classics.

You see, people haven’t changed that much. What has changed is technology. The more you study literature and English, the more prepared you will be to meet reality when it confronts you. Otherwise, you’ll treat everything as a debit or a credit, or whatever else you studied because you have limited your own horizon. With respect, if you eliminate the study of English or think it of no value, you’ll end up like Yorick, an empty human skull, “abhorred in imagination.”

Let me hear from you soon!

2 thoughts on “Alas, poor Yorick! Do you know him?”